How does a startup still feel cozy and cohesive when it has ballooned into an 800-person organization? Many architects in the San Francisco Bay Area have been enlisted by tech companies to foster a sense of communal purpose—that all-hands-on-deck excitement—within corporate-scale digs. A new office for the design-focused company Pinterest, which allows users to create and share digital inspiration boards, is a refined example of how to steer people toward each other.

“Pinterest is about a grid that structures all the ideas and images, and architecture provides the grid in building,” says cofounder and chief creative officer Evan Sharp, who studied architecture at Columbia. “We wanted to set up the right architecture to shape circulation and the qualities of the working environment to reinforce collaborative behavior.”

It’s the second time that Pinterest has tackled the design of a workspace. Its first headquarters, which it continues to occupy, is just down the street from the new offices in San Francisco’s South of Market neighborhood. For this expansion, it tapped local firm IwamotoScott Architecture to design roughly 100,000 square feet of space, taking up the lion’s share of an existing four-story building. The small design firm, led by Lisa Iwamoto and Craig Scott, has other notable offices to its credit, including Bloomberg’s Tech Hub (RECORD, September 2015); in this case, they collaborated with larger firm Brereton Architects. The new office brings Pinterest’s software engineering group under one roof and is designed to accommodate up to 700 staffers.

For Pinterest and other tech startups, one of the most desirable attributes of a building is big, open floor plates, the better to accommodate more people on one floor. The building they selected, originally a John Deere tractor factory built in 1911, had 30,000-­square-­foot floors, good-sized bays defined by concrete mushroom columns, and a large central atrium. Unfortunately, the atrium only came down to the second floor, and the ground floor was oppressively dark.

As part of the renovation, the design team extended the atrium the extra distance to the ground level to bring in much-wanted natural light. They took delightful advantage of the opportunity to add a sculptural stairwell in the center that connects the ground floor to the second level. Clad in white steel mesh and glowing with daylight, the luminous portal is the focal point. It is also replete with interesting angles; the architects designed the two stair runs to cross slightly to create an abstract representation of knitting (a favorite term in the Pinterest lexicon, used to describe its company culture and how various disciplines intersect). Smaller versions of the stair, wrapped in the same perforated steel but outside the atrium, connect the other floors farther up.

The now-bright ground floor is devoted primarily to social areas: spacious front and back lounges flow into a large open dining hall, which doubles as a forum for all-hands meetings. On the three floors above, the work areas are arranged strategically in circles around the atrium, in a natural progression of public to private. The most personal spaces, the individual workstations, are located at the periphery of the building, by the windows; the next ring contains the team meeting rooms, which are assigned to groups for their specific use and cannot be booked; and, closest to the atrium, are the reservable conference rooms.

To create a collegial sense of intimacy, adjustable-height desks are shorter than average and tightly packed. A “library” is outfitted with carrels, casual lounges, and small meeting rooms to accommodate different work styles and situations. Reflecting the current trend in office design, there is a generous allowance of meeting rooms within the open-plan office. They are arranged in a checkerboard fashion, alternating enclosed spaces with open lounges for a more relaxed feel. Eighteen-inch-wide glass panels at the corners where the rooms touch provide a glimpse of what is going on.

The office is finished with extensive expanses of that DIY favorite, plywood, used in some ingenious ways. The reception area’s ceiling treatment is sharp: deep plywood slats in a diamond grid form a contemporary version of a coffered ceiling. Walls of black-stained plywood and gypsum board painted dark gray, in addition to polished-­concrete floors and carpeting in varying shades of gray, create a calm backdrop for the work at hand. “It’s a simple, clean aesthetic, but not minimalist,” says Iwamoto. “We wanted to create a richness through materials, spatial and volumetric elements, and architectural detailing, instead of using appliqué or surface treatments.”

Indeed, in keeping with Pinterest’s mission to promote creativity, the space is designed to be a plain canvas that the occupants can make their own over time. The staff has a tradition of “make­athons” and have yarn-bombed structural columns and created art installations in their other offices. “It’s important for employees to feel ownership. It shouldn’t feel like you’re renting someone else’s space­—you should be able to paint the walls,” says Sharp. And, in this case, also turn the stairwell different hues by putting colored lenses on the skylight, which employees have already had the fun of doing. 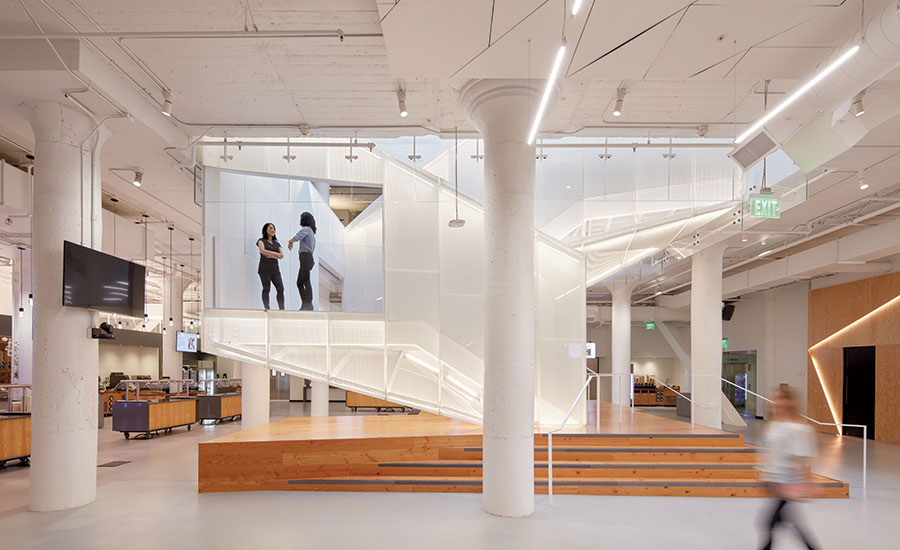 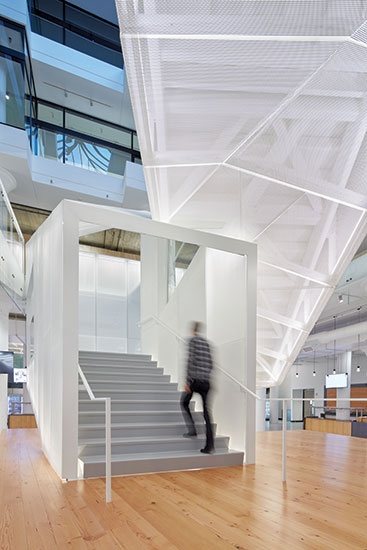 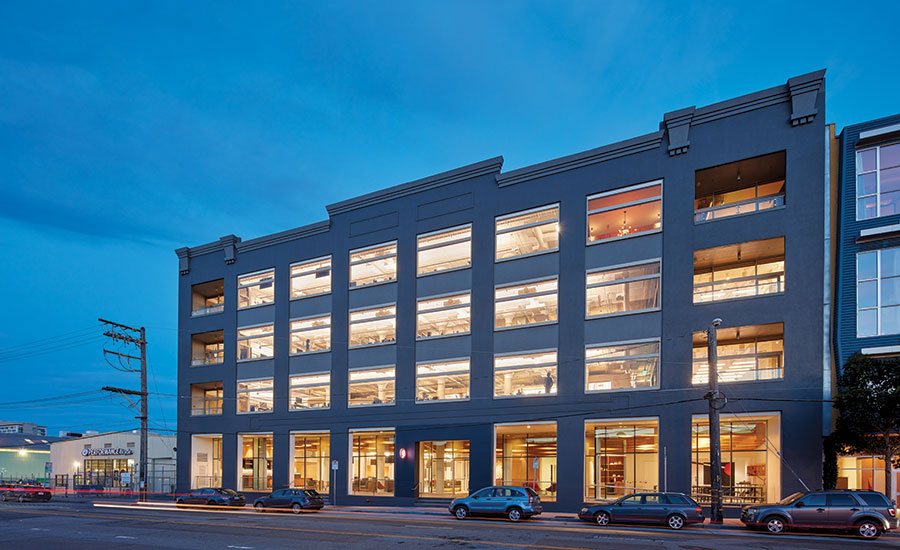 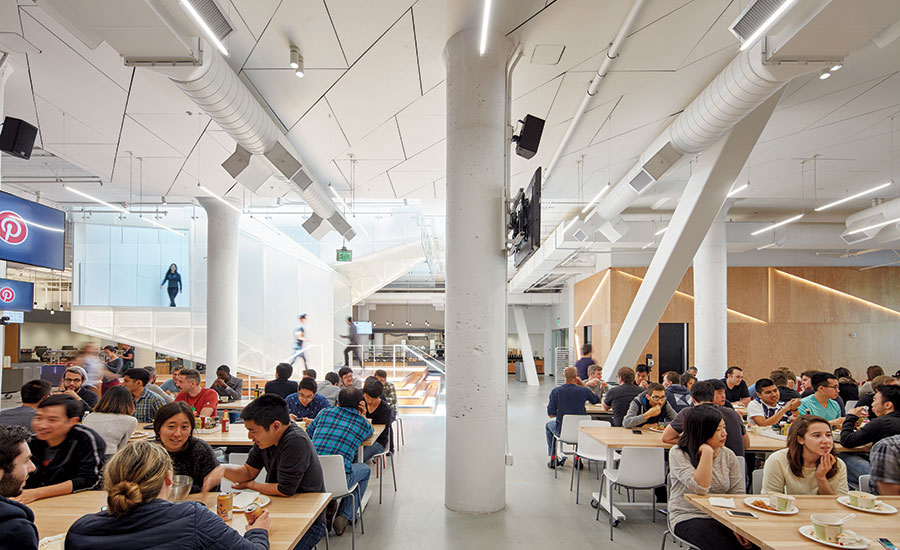 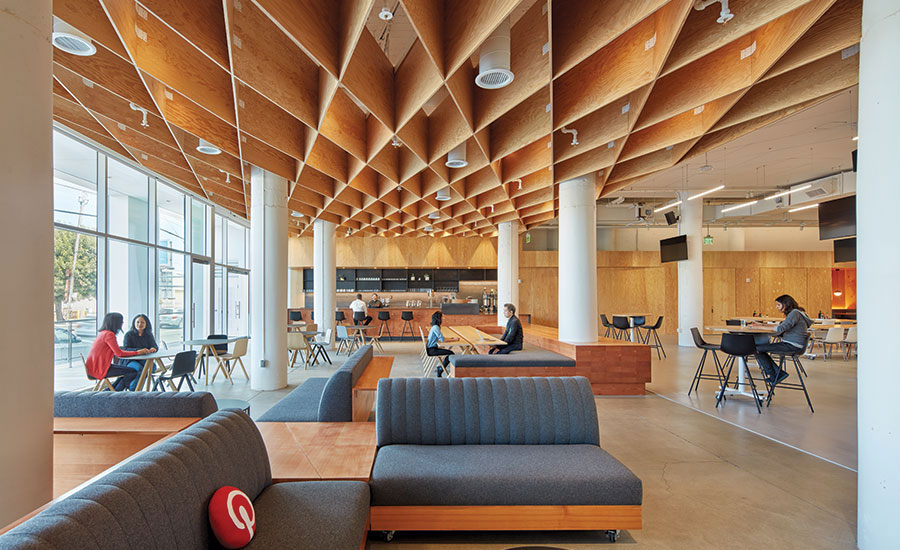 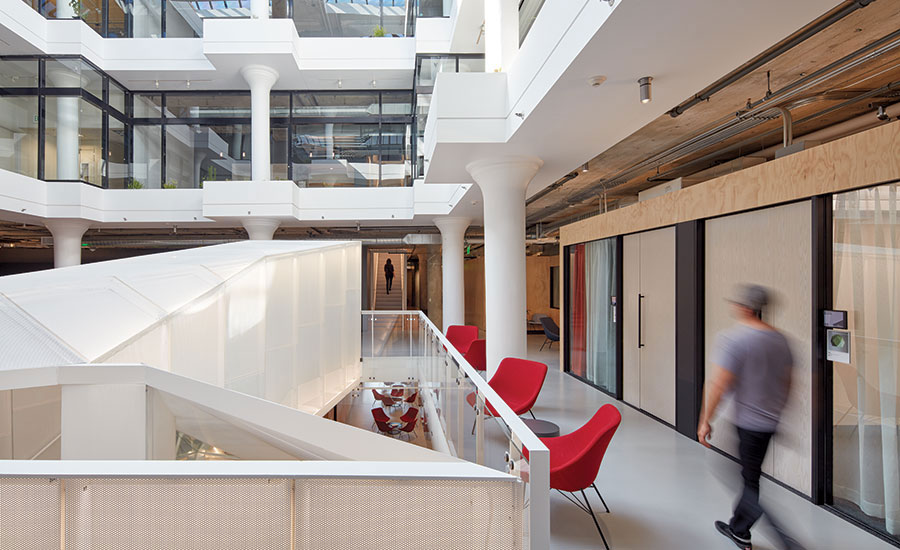 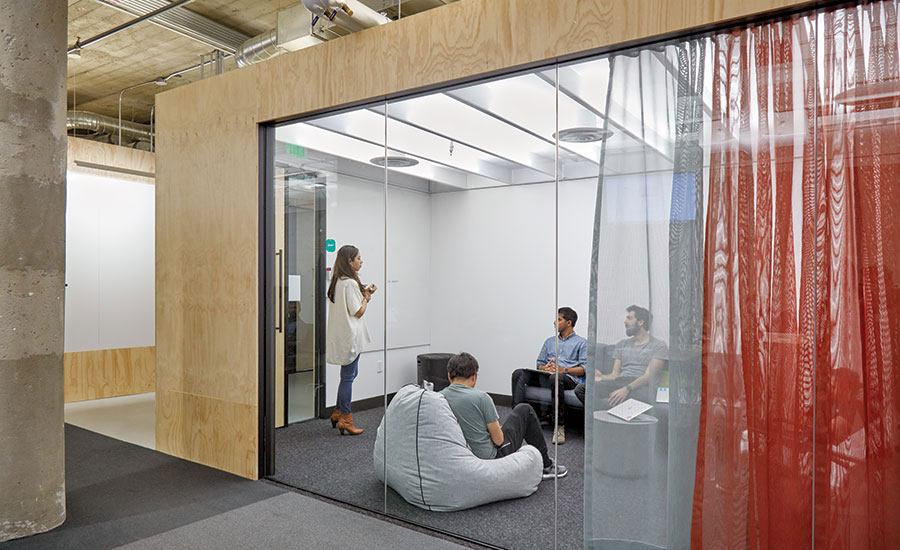 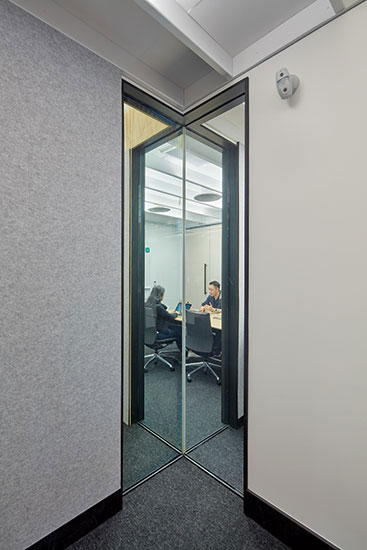 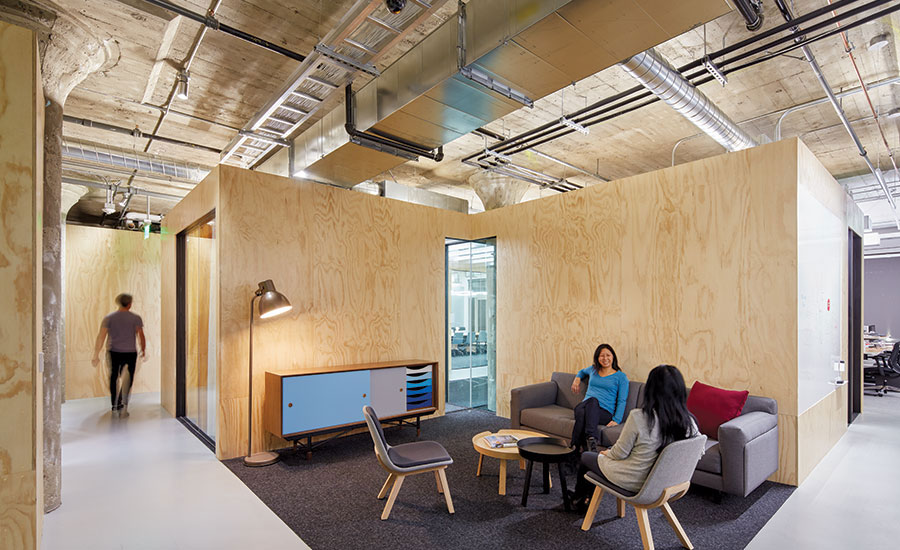 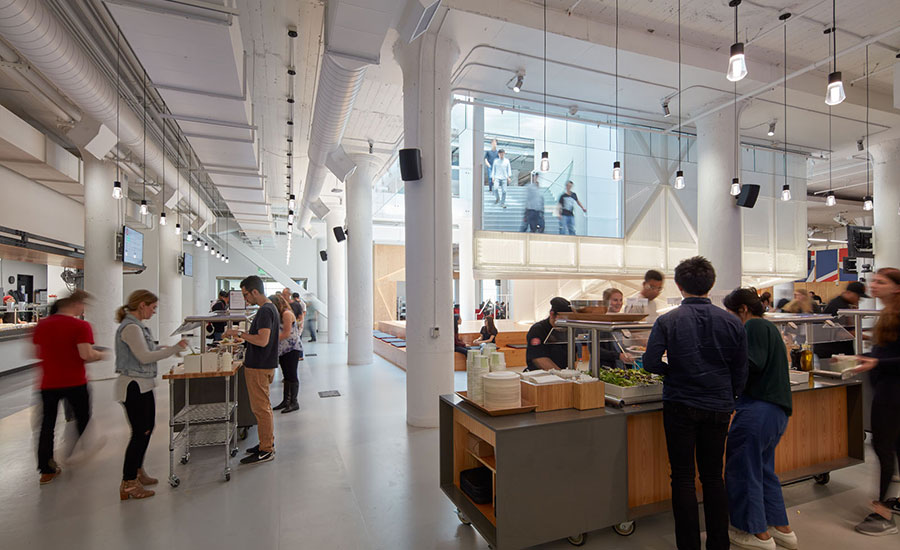 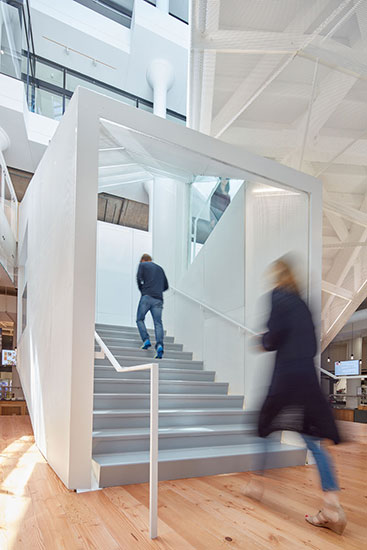 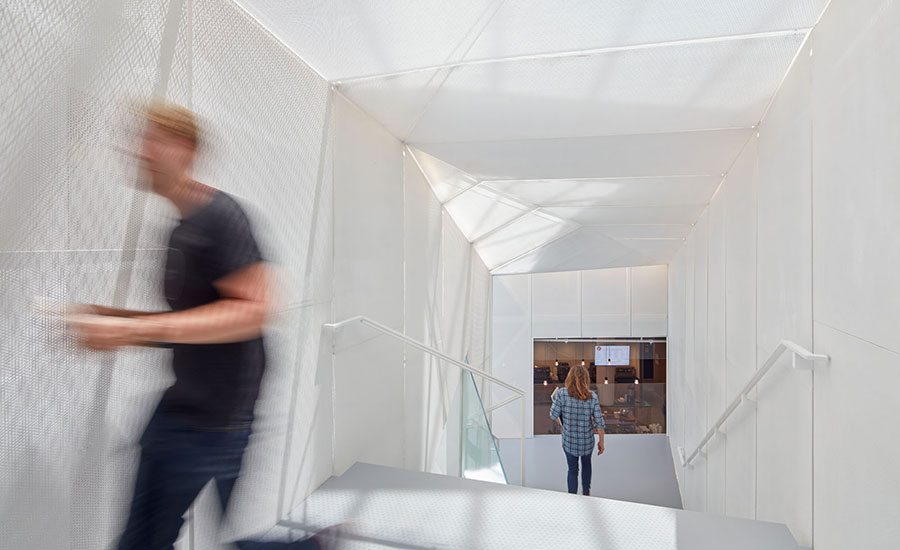 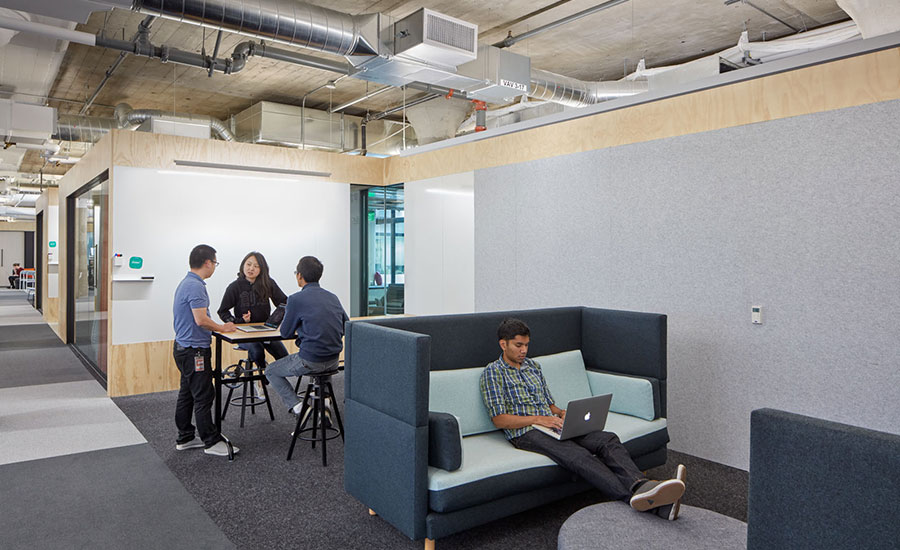 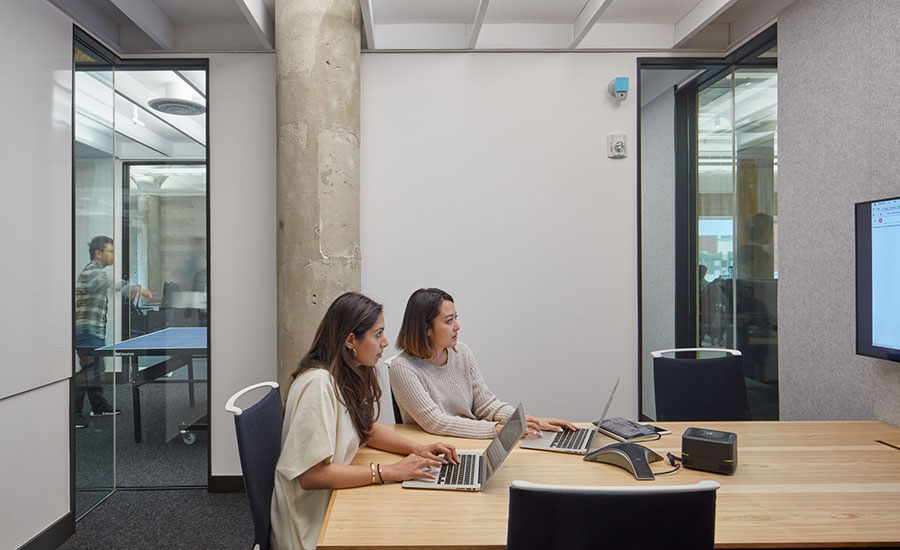 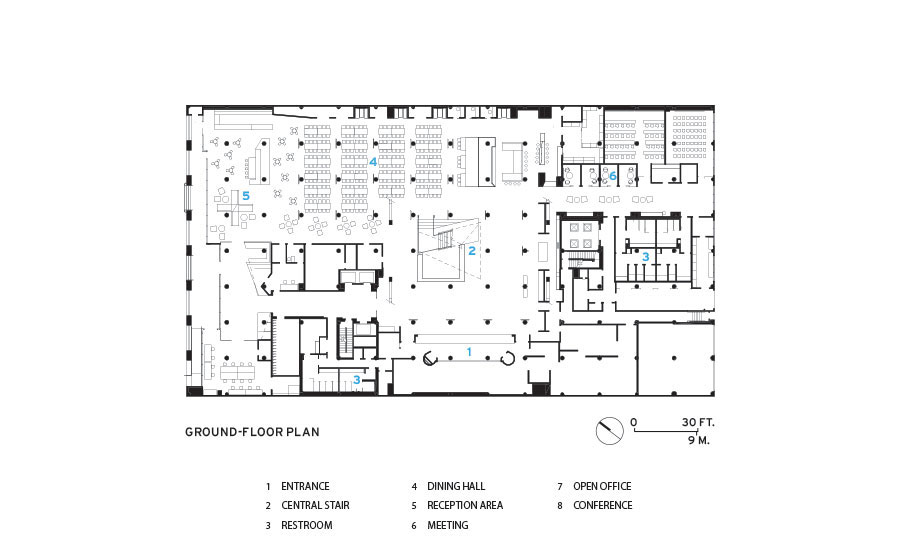 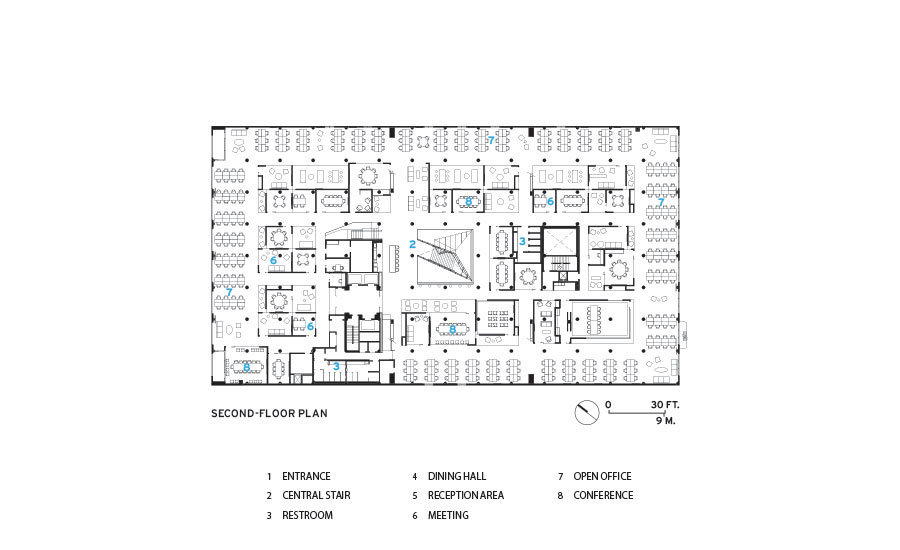